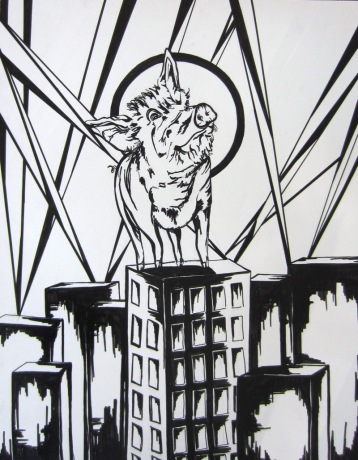 The other day I heard a news report that is pretty common. It regarded big banks (which to me equals a bunch of super rich men and perhaps a few women) who were acting like jack asses with other people’s money. The amount of money these banks had played with and lost was astonishing.

Shortly after that, another report came on talking about Mitt Romney and some out of touch thing he had said regarding money.

Both of these reports got me thinking about the old saying “high on the hog.” Years ago, I imagine saying such a thing meant someone was doing well for themselves – they bought a new car or house or took a big vacation. But what in the heck does it mean today? Instead of one new car, perhaps a few new jets? Instead of a house a block of buildings?  To be high on the hog these days, the hog has got to be sitting pretty high. 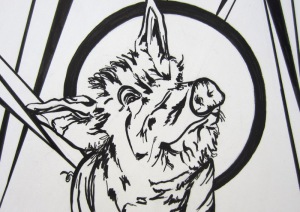 nk of this adorable pig as social commentary, just think of it as “Babe – Pig in the City.” That’s what the boyfriend says it reminds him of anyway.

Original and print available for purchase.