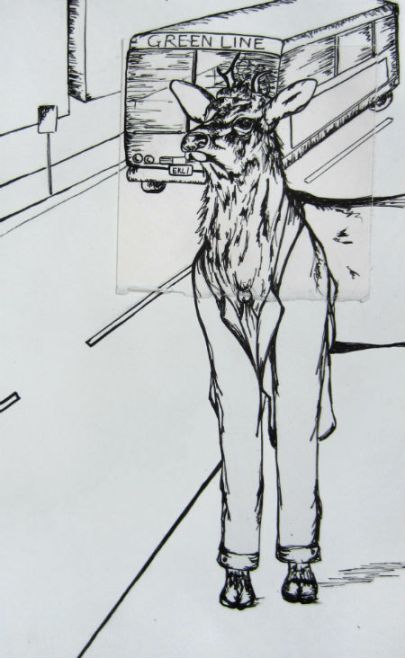 He recognized long ago that he wasn’t like the others. Physically, he didn’t belong. His stubby antlers never reached a length of more than a few inches. And he honestly didn’t care for foraging or trudging through four feet of snow in the dead of winter.

Not handsome by nature’s standards – that required a six point rack at the least – but sharp as a tack. Numbers were his thing.

So he packed his bags and made his way to the city. Wall Street specifically – where a fine suit and silk tie trumped antlers hands down, and numbers were the name of the game.

No bad mouthing or hitting below the belt. No deals made under the table. He’d vowed to take the high road on this one.

But as he rounded another bend to see the great distance remaining on the high road, he began to think twice. His pace, as you might imagine, was not so quick. And with no one to keep him company, the alternate routes were looking much more appealing. 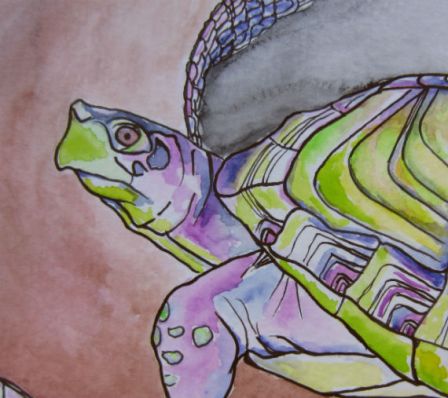 Arting for 365 is really one of the best things I have done for myself. The adventure started out as a broad idea to get myself making art again. But (as cheesy as it sounds) it has become so much more. One of the greatest things I’ve learned is that ANY amount of time you can dedicate to what you love, is still dedication. There are days when I only have 10-20 minutes available to create- but those minutes are valuable. Those minutes make me a better artist.

If there is something you love to do, but you haven’t made time for it, start making time. Give yourself 10 minutes a day. Not sure where to find those 10 minutes? I’ve got some brilliant suggestions:

Forego the shower: As long as you can’t smell you, you don’t stink.

Don’t make dinner: Make your kids do it. Don’t have kids? Make your spouse/neighbor/friend or pet make you dinner. Even better, hire a chef. I hear they are super affordable these days. Better yet, skip dinner: We could all use to shed a few lbs anyway

Literature time: Instead of reading that magazine on the pot, bring in a pen and paper.

Commercial time: Give up the Tivo, it’s pricey anyway. Do a little of what you love during those awful political commercials.

Pet care: I’m not saying DON’T give the dog a walk. I’m just saying buy a treadmill and put the dog on it.

It’s as easy as that.

5 x 7″ Ink and watercolor on paper

Within the past two months or so, for some unknown reason, I have developed a slight fear of squirrels. This is a bit embarrassing for me to admit, as up until that time I found them to be much as I find the rest of the neighborhood animal kingdom – adorable and harmless.

When walking or jogging past them I worry they think I am scheming to steal their acorns. Because I feel rather certain that this is on their minds, my fear is they will turn to chase me in attempt to defend their coveted food. I am working hard to shake this ridiculous fear and even tried to sweet talk a baby squirrel out of the apartment hallway the other day – even though I was pretty certain the mom was probably close by, ready to pounce.

I’m confident that I will once again love the fluffy tailed rodents. I will start by convincing myself that they do not have a shared list expressing the following:

He’d had enough of the fervent outbursts and daily monologues. As a pet, Flash was his owner’s sole audience. And there was only so much of the endless, irrational commentaries on life and politics he could tolerate.

He had attempted to bury his head under pillows in order to drown out the sound, but in the middle of summer that can be hot. He’d feigned sleeping, but that didn’t seem to stop things either.

Even his last attempt – clever as it was – to communicate his feelings was ignored.

Flash sighed and thought, “You can’t choose your owner.”

If you think this drawing is awesome, you can purchase a print here.

The tooth had been giving him fits for days now. He’d tried some herbal remedies and ointments but they just weren’t cutting it. After reading up on the issue in Everyday Health Questions Answered; A Guide to Holistic Healing, the progressive lion determined the tooth must go.

While he couldn’t say he was thrilled with the idea of removing his canine, he did feel oddly pleased with his recent choice to switch to a vegan diet – a justification of sorts. As his tooth was being pulled he reflected that, without a doubt, this all natural approach to life was really the best thing he could do for himself – the king of the jungle.

If you can’t live without this, you can buy the original or a print.

As most of you know, I’ve got this little goal of creating a piece of art everyday for 365 consecutive days. A good chunk of my pieces are completed within a day, but some of my larger projects take a few days to complete. When that happens, I make sure I create a smaller piece along with working on the big guy, so as not to feel like I’m cheating.

Some of you may also be familiar with my stunning ability to underestimate how long something will take to complete. Yesterday, as I put up my drawing and got ready to call it a night, the boyfriend looked at what I had accomplished. He quickly asked me what I planned to create for day 110’s work. I assured him I’d be able to finish up the piece I had been working on in a few short hours the next morning. He gave me a look of disbelief. Actually, I like to think it was more of a “You are the most fabulous person in the world and I love you dearly, but don’t be ridiculous” kind of look. I glanced down at the barely inked up paper and reluctantly admitted he was right. -Not out loud of course. Out loud I told him I would create a second piece but that “I would not need to use it.”

I hate it when he’s right.

If you can’t live without this piece, you can buy a print or the original. 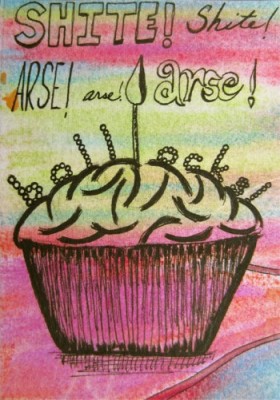 Running through a short list of basic English cuss words, a smile came across my face. You see, when a person with a fabulous British accent spouts off anything, it sounds lovely to me. I’d go so far to say that they make profanities sound adorable.

A mad man could be screaming horrible things at me, but so long as he had a great English accent and used words like bollocks, I think I’d just grin and let him how fun he sounds.

If  you can’t live without this little design, you can buy it. Email me for prints.

He felt good. He felt good because he knew he looked good. “Actually,” he thought to himself, “I look amazing.”

The look was edgy. New. It said “notice me,” while simultaneously commanding “think twice about messing with me.” He was certain his new style was soon to be all the rage. 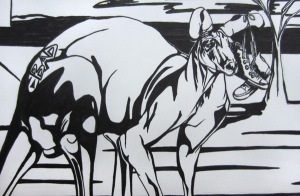 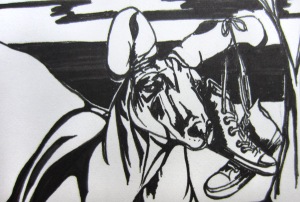 If you love this piece, you can buy it here as a print, or contact me for the original.

Goal: To create a piece of art each day for 365 consecutive days

The elephant wasn’t as big as she’d imagined he’d be. She wasn’t sure if this was due to the elephant actually being somewhat small for a pachyderm, or if the room was overly large. Either way, it was a pleasant surprise. A small elephant in the room seemed much more manageable than a large one.

Original painting is available for purchase.