This image might look familiar to some of you. I created it as a Valentines card a week or so ago. Typically I wouldn’t re-visit the exact same imagery in a new piece of art, but I felt I had sufficient reason to.

The gallery where I have my studio put out a call for entries for their Heart Art show. The theme is not one in which I would typically enter a piece, but because I am trying to be as active as possible in the shows here, I thought I’d give it a go. I chose to repeat this image for two reasons 1. I liked the humor and the fact that I was depicting a human heart. 2. I wanted to work on a pinhole image that allowed me to focus on creating form

I’m pretty happy with the result. I’m hoping the gallery goers will be too.

This piece available for purchase here

There is a place lined with little streets and tiny houses

Whose roots feel their way through cool, damp dirt

Fracturing cement slabs that were unaware of their presence

Linking the world below

I began working on a larger scale piece yesterday in which I planned to incorporate thread. As I started stitching into the work though, the effect was not as I had hoped. I was going for more of an organic feel and wound up with – as should have been expected – very geometric lines. As I removed the thread from the paper I began to take notice of the small holes that remained. I thought they were wonderful and so added more to a few points around the paper.  Suddenly it dawned on me that I could create an entire design solely by poking holes.

I pulled out a smaller piece of paper and after a few hours, ended up with this piece. I love the subtlety of it. As a viewer you are forced to get in close to see what has been created. Beyond that, there is a really great texture that results from the needle piercing the paper. I also love that nothing has been removed or added to the paper to create this piece of art. I feel like larger scale versions are on the horizon. 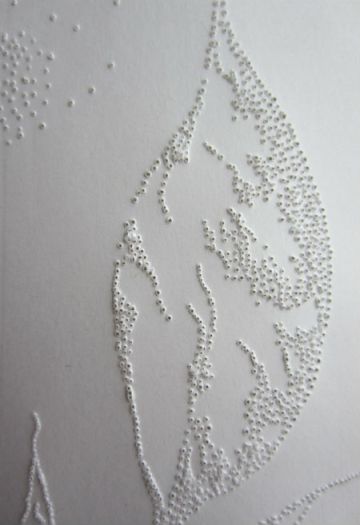