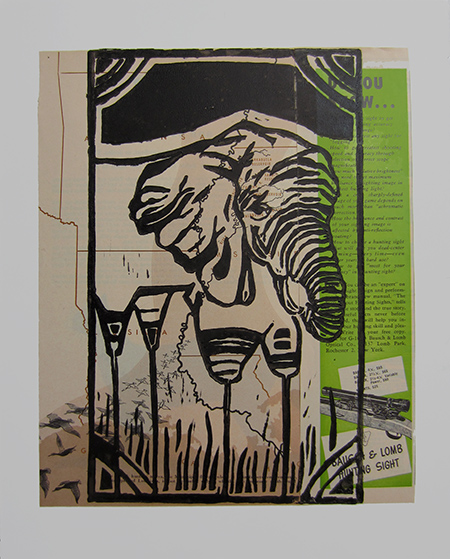 Yesterday I began pulling out older work to hang on my studio walls, since many of my paintings are currently hanging out in Twin Falls, ID. As I sifted through the days upon days of  art that had accumulated I came upon some elephant prints that I had done early on. I was reminded how fun a process carving the rubbery material was and how much I enjoyed the end result. I pulled out a bunch of paper and a canvas and decided I would create more editions. I collaged paper using an an old magazine for one edition, created a watercolor for another, cut up a work that I have never really been fond of, and lastly painted a canvas as a backdrop for the final print.

It was as much fun this round as it was the first! 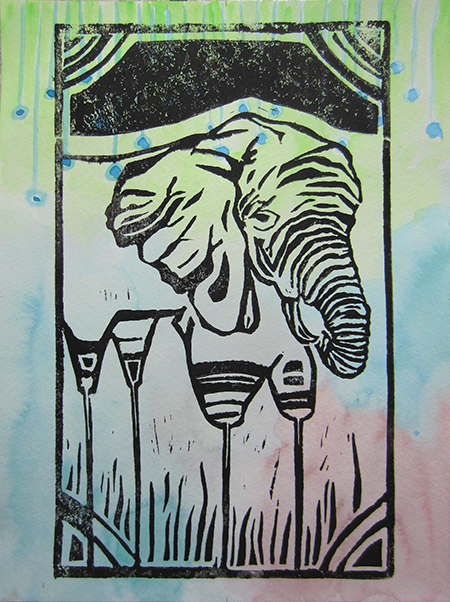 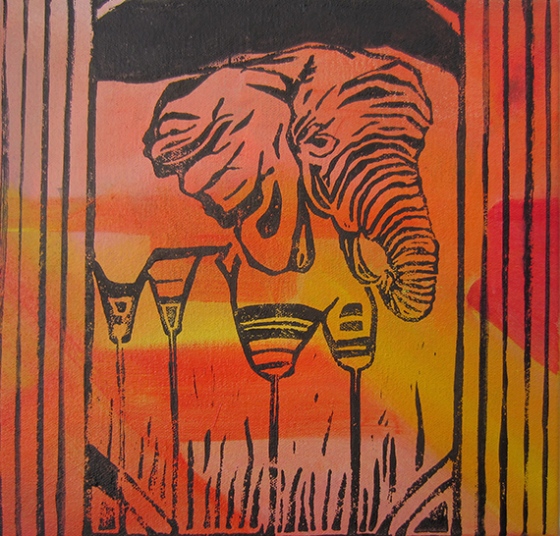 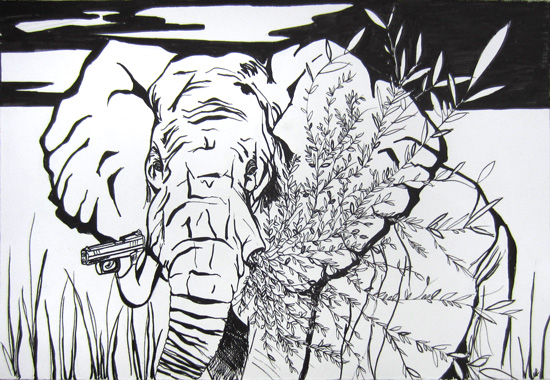 I heard a report on the news yesterday that ivory is once again a hot commodity, especially in China. This means poaching of elephants has drastically increased.

It was a pretty disheartening story, especially because I find elephants to be really amazing animals (strong, smart, wrinkled with character). But the report also got me thinking.

It is said that elephants have already begun to evolve smaller tusks due to poaching. Will this continue at a more drastic pace until the tusks are basically worthless little nubs? What kind of evolution would it take for elephants to truly defend themselves against poachers? 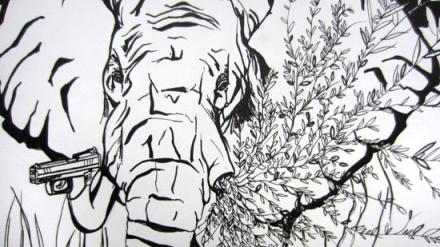 Feeling like you can’t live without this drawing? Buy it here.

Goal: To create a piece of art each day for 365 consecutive days

The elephant wasn’t as big as she’d imagined he’d be. She wasn’t sure if this was due to the elephant actually being somewhat small for a pachyderm, or if the room was overly large. Either way, it was a pleasant surprise. A small elephant in the room seemed much more manageable than a large one.

Original painting is available for purchase.

It is not very often that I get mad. I think most would even call me a laid back gal. There are exceptions to this, of course; such as with folks who are repeatedly rude, my interactions with computers that refuse to cooperate, and, it turns out, my dealings with a health insurance company who is raising my rates…again. 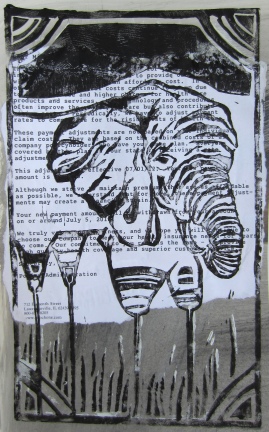 Text in this black & white print is the insurance letter I received informing me of my increase in rates.

Yesterday, after frustrating conversations with United Health and lengthy searches on the internet, I was mad. Lucky for me, the incident proved good fodder for day 44’s project. I quickly began to carve out an elephant with stick legs. The skinny structures seem useless other than as a means to prop the poor thing up. I have a myriad of ideas as to what I was trying to express while creating this piece, but I am more entertained by the boyfriend’s thoughts: “It looks like the elephant’s legs got run over by a lawnmower.” Sadly, he couldn’t afford the health insurance to fix them.

ill need a little bit more in order to move things down a ways.I hope tahat works because it sure iwould be handeir than what is happening. 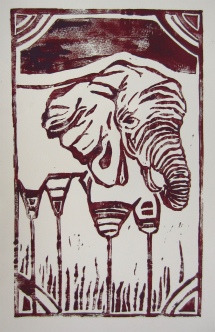 These pieces available for purchase at https://www.etsy.com/listing/101973357/stick-legged-elephant-mixed-media-print or by emailing me at micah@azzlsoft.com

Now that unemployment and I have gotten to be such close friends, “What am I going to do with my life?” is a question that frequently interrupts my thoughts.  And while I have come to no clear conclusion, it seems that making stuff should definitely be a part of the equation. What better way to commit to this vague goal than by creating something every day.

My first official day of this endeavor was yesterday (4/29/12). Inspired by the shapes within and moldability (my made up word) of an egg carton, I created this geometric elephant head. He’s about 15″ x 11″, painted acrylic.