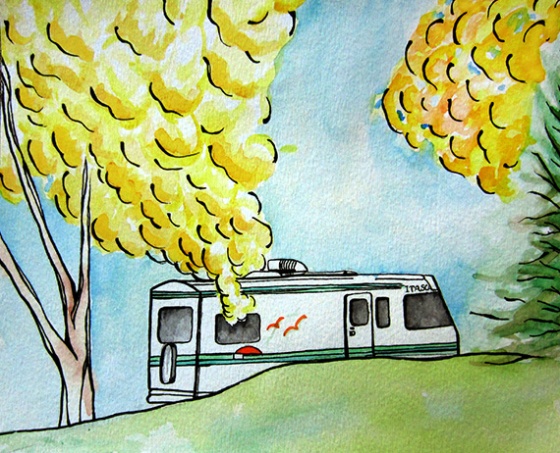 For awhile now the boyfriend has expressed his dream of living in an RV and a few months ago we even started looking at them semi-seriously. As our lives continued to get ever more busy, though, we decided to put the idea on the backburner. That is until last week. Last week we received a letter explaining our rent would be going up. While the amount wasn’t a huge increase, I wasn’t pleased. I was ready to move. The issue lay in that the boyfriend hates moving and firmly stated that their raising the rent was not enough to get him to move again. “What if we moved into an RV?” I asked, feeling relatively certain I’d know my answer.

Sure enough, this past weekend we bought an old 1994 Winnebago Itasca Sunrise! She (Gertrude as named by the previous owner) is a beauty, seems to run like a dream and is a hoot to drive as long as you are not in Denver traffic. I can’t wait to start our adventures with her – the first being winterizing Gerty for the upcoming months in Colorado. I can’t say we are the wisest people for taking on RV living as winter is moving in, but heck, no one ever said adventurous and wise go hand in hand.

I'd love to hear your thoughts. Feel free to post them here. Cancel reply