We’ve been watching this really cheesy show called Eureka. It’s about a town full of super brainy scientists whose experiments frequently go awry and a regular-Joe sheriff. Initially I thought the show was awful, but I must admit it has grown on me – even if it is highly predictable.

Last night, while having dinner, we watched an episode about a big bang experiment. This for some reason got me thinking about string theory (something I hardly/don’t grasp). Then I came across a small watercolor I had done and remembered a drawing my sister-in-law had commented on that, when I thought of it again, made me think of string theory.

Day 38’s work is a watercolor and ink Eureka, universe, string theory inspired tryptic. I think what I enjoy most about the piece, is that after I was done with it, I no longer thought about science-y stuff, I just enjoyed the shapes and figures that seemed to appear in the work.

Note: This great TED talk on mulit-universes & string theory by Brian Greene put me the closest I’ve ever been to actually understanding what these two things are about. 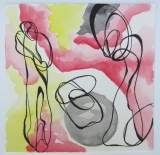 This work available for purchase at https://www.etsy.com/listing/101522495/strings-of-abstracction-mixed-media or by contacting me at micah@azzlsoft.com

I'd love to hear your thoughts. Feel free to post them here.